We are blessed by all the amazing volunteers who support women and girls in Kenya.We hope they and many others will be inspired by and join in our mission to raise that same amount and more in 2019! Many, many thanks to one and all. May god bless you and keep you safe!

Earlier this year, Grandmothers Circles in the U.S. sent a $12,000 scholarship fund to Kenya which is supporting 20 girls currently in boarding school. Another $1,500 general fund contribution was sent which has been used for

A group took it upon themselves to raise additional funds to offset ongoing expenses for an ailing Consociate named Aloys who became paralyized on one side and is unable to work. In a recent letter, Mary Lieta said:

“We want in a very special way to thank you for Aloys’ support. We have never encountered his condition among us and this came as a great challenge for us. May the good Lord bless the work of your hands.”

Mary notes that the rainy season has brought a “basket of misfortunes” to the valley including flooding and displacement of families. In addition, Kenya is experiencing a new wave of violence in families across the country — with the killings of wives and children by spouses. She asks us to keep Kenya in our prayers.

The Marit Women Group considers themselves blessed to have received  large  sewing orders which will help them fund scholarships for three additional scholarships. 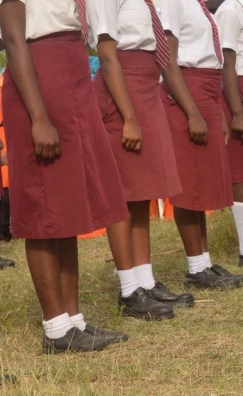 “Serphine and I are busy stitching away all day long,” says Mary Lieta. “This will go a long way in helping us assist the three girls that we added to the original twenty.”

A new challenge for the group is that four recent graduates are asking for further assistance with middle college education. The Marit Women Group would like to help them if they can, says Lieta, “It is gratifying to see girls who would have never finished school do so.”

With severe drought gripping many parts of East Africa, many are facing starvation.

Grandmother Circles US and the Consociates of the Sisters of St. Joseph Carondelet were able to send the Marit Women’s Group $800 to purchase food  supplies. Here’s an update from Mary Lieta:

“We have now purchsed a huge consignment of maize and are selling at a reduced priced. To the very needy, we are giving portions for free. It is very satisfying to see the smiles on the people’s faces as they come to buy. That has replaced the pain we used to see on the buyers’ faces. We too are so glad to be in a position to help. I have attached a picture of our maize in the store.”

If you are able to donate additional funds, they will be sent immediately to Kenya and put to work by Grandmother Circles to relieve hunger. Donate

It is the middle of March and however long we stare at the skies, there’s no sign of the rains. We do realize that our part of the country is not as hard hit as the drier regions in Kenya and give glory to God for that.

Yet there’s scarcity of water especially for people far from the lake, the price of maize is the highest at this time of the year for the last 10 years, there’s no green for the animals to feed on and the temperatures are just unbearable- boiling hot.

The skies darkened three weeks ago and people made frantic efforts to plant. Now the gardens are full of weed and no crops did sprout. The animals are dying!

This is where my admiration for the people at the lake is at its highest. They still, with a smile greet you in the morning:”

The day has dawned”- (Oyaore) at midday: “It is well” (Ber) and in the evening: “ Darkness has set in” (oimore). They state mere facts without implying the pain that runs through the day and night.

Children run off to school on empty stomachs. They say if they don’t eat anything, hunger dies in their stomach until lunch time. I have tried it and it does work!

Marit Women group managed to pull down the price of maize in the last 3 weeks by investing ksh.55,000 in 15 bags of maize. We last did this in 2011 and are proud to have put smiles on grain buyers once again.

Thanks for being with us in prayer, Mary Lieta

Marit Womens Group members in Kenya were able to collect enough money to pay for an additional three girls to attend school — in addition to the 20 girls attending on scholarships funded by Grandmothers Circles in the United States.

Two computers were purchased and immediately put to work:

Funds raised in the US are also being used to enable a child named Bajohn to receive treatment for a heart condition at a special Mission hospital. Mary Leita promises to send updates on his recovery.

The funds in the past have been used for emergency medical needs, replacement of a burned house, to help pay for funerals and other needs as they occurred.

Thank you for your part in our being able to provide this much needed support!!

Grandmother Circles in Kenya recently rushed to aid secondary school girls whose dorm was destroyed in a fire just before end-of-year exams began. It was a school where the local circle had already been providing water and sanitation.

Grandmother Circles members went over quickly with practical assistance such as clean underwear and sanitary supplies.  More importantly they spend hours providing comfort to the inconsolable girls. Here are pictures from the scene: 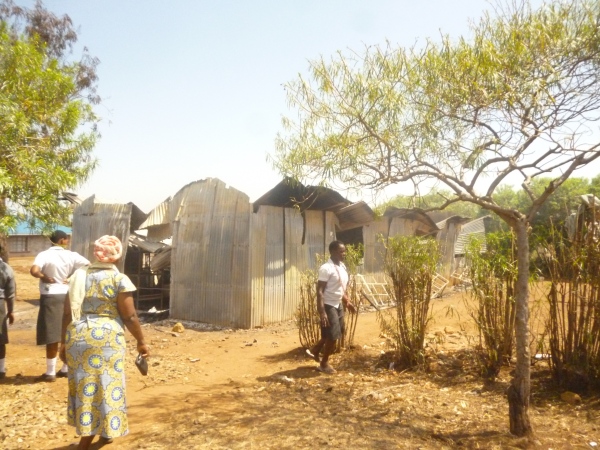 Contributions to help the girls replace clothes and books lost in the fire would be greatly appreciated. Donate here